SBM concrete and handling technology at BGO in western Switzerland 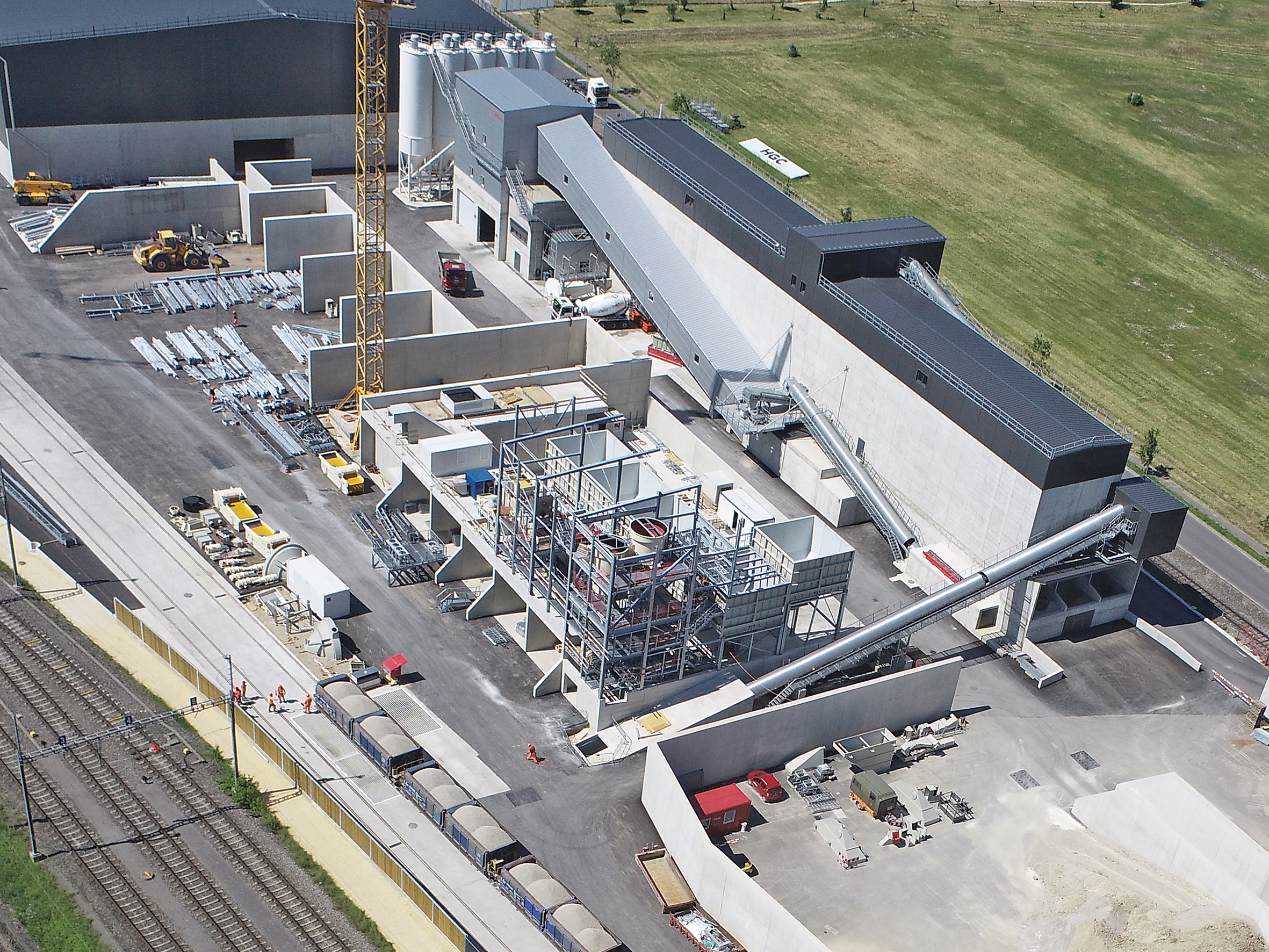 The recycling centre for building rubble and mineral residues in the municipality of Vufflens-la-Ville is located about 20 kilometres north-east of Lausanne. On the conveniently located 3.6-hectare site with its own railway siding, a wide variety of source materials are accepted, professionally separated and processed, and fed into sensible construction recycling in the greater Lausanne area on the north shore of Lake Geneva. As an important addition, the regional transport, demolition and recycling companies cooperating at the site have invested in the past two years, together with supra-regional construction and building materials companies, in an efficient concrete plant with an attached central high-silo storage facility for the high-quality RC granulates produced on site and primary materials supplied by rail from the region.

The new plant of Béton Granulats Ouest Lausannois SA (BGO) plant will fulfil important tasks within the regional circular economy. With a targeted annual production of around 100,000 m³ of all common concrete types according to Swiss standards and a large number of individually adjustable recipes, BGO fully meets the requirements of regional customers and scores with high availability and short distances. The same applies to the storage facility with its estimated annual turnover of around 300,000 tonnes of primary and secondary materials: In addition to providing concrete aggregates, the high silo warehouse with a total capacity of 6,000 m³ also supplies regional construction companies with certified recycling building materials or raw aggregate grains. In particular, the raw material deliveries by rail reduce the transport costs for local users, improve the environmental balance and should also avoid environmentally critical raw material imports in the future in the Swiss region close to the border The delivery distances of the crushed raw aggregates from partner plants near Bière (via truck) and Apples (by rail) are currently around 20 kilometres. In the medium to long term, the operators have set a target of 60 % recycling in production and handling. 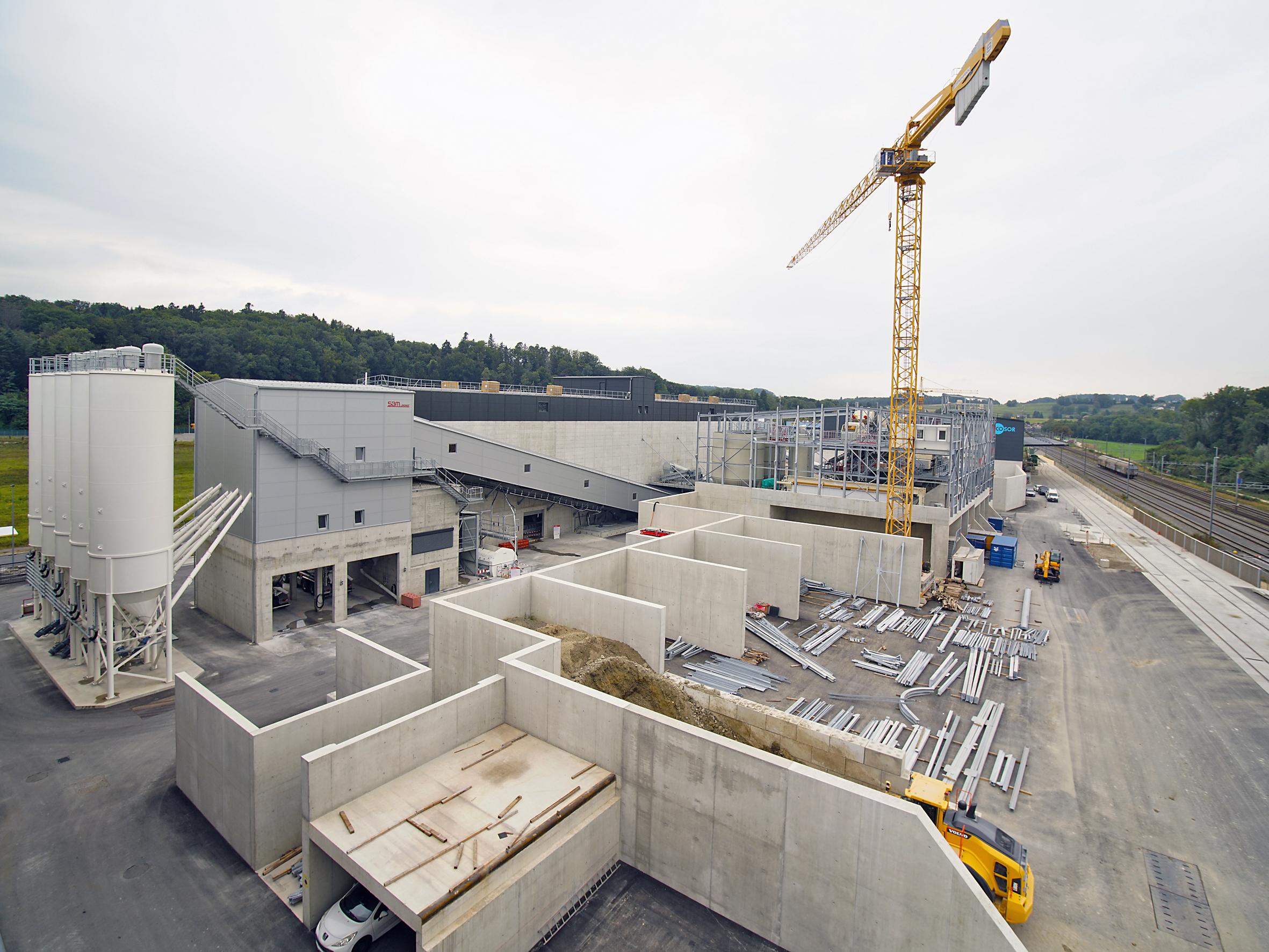 The production processes and the local conditions required a most integrated planning and realisation of the concrete production and the upstream aggregate storage. After initial discussions in 2017 and detailed project planning up to the awarding of the contract in spring 2019, SBM Mineral Processing, under the leadership of its Swiss representative Wagner+Betontechnik, prevailed in the competition against three other suppliers. For the BGO concrete line, the choice fell on two LINEMIX® 3500 ST stationary concrete mixing plants installed in parallel, while the aggregate side is based on the LINEMIX® ST 5760 stationary SBM aggregate store.

Both plant lines were precisely adapted to the customer's requirements along a specification sheet. This concerned the specific charging and loading options, the installation of three mixer/pump washing stations with integrated residual concrete recycling and, in particular, the central control/monitoring of the largely automated processes from a central command room. Thanks to 3D planning, it was possible to precisely determine all details of the plant technology, which is completely housed in a building complex that merges into one another (volume: 20,000 m³). Only the enclosed charging and feeding conveyors as well as the five binder silos with a total storage volume of 850 tonnes (8 chambers) are located outside the winter-proof insulated building shell, which safely guarantees the year-round operation of the concrete mixing plant and aggregate terminal.

After thorough preparation of the subsoil with more than 40 bored piles, some of which were more than 50 m deep, and the construction of the foundations by the customer, SBM's own assembly teams began the parallel assembly of both lines in May/June 2020.

The total of 30 storage silos, each with an active volume of 200 m³, are fed via eight conveyor belts. The block train and lorry unloading points, which are about 40 m away, are pulled off via a common belt, to which the washing plant for recycling grains, which will also be newly constructed in 2021, is connected. Another conveyor takes off three external bunkers, which are fed from the stockpile by wheel loader. At a height of around 15 metres, two reversible distribution conveyors then feed the individual grains into the concrete silo chambers equipped with level sensors.

The gravels for the truck loading are volumetrically metered via 22 discharge metering belts and are fed onto a separate collecting belt. For the production of mixed gravel, a continuous mixer was installed directly in front of the truck loading facility positioned on the side of the silo construction.

All 30 chambers are equipped with dosing conveyors for the fully automatic, recipe-precise composition of the concrete aggregates, which guide the individual granulations to the downstream weighing units consisting of a total of three conveyor belts. Afterwards, the weighed components reach the aggregate pre-silos above the two mixers in the BGO plant via separate feeding belts.

In total, no less than 75 conveyor belts are installed in the aggregate store for silo feeding, the material footing and delivery to trucks or the concrete plant. 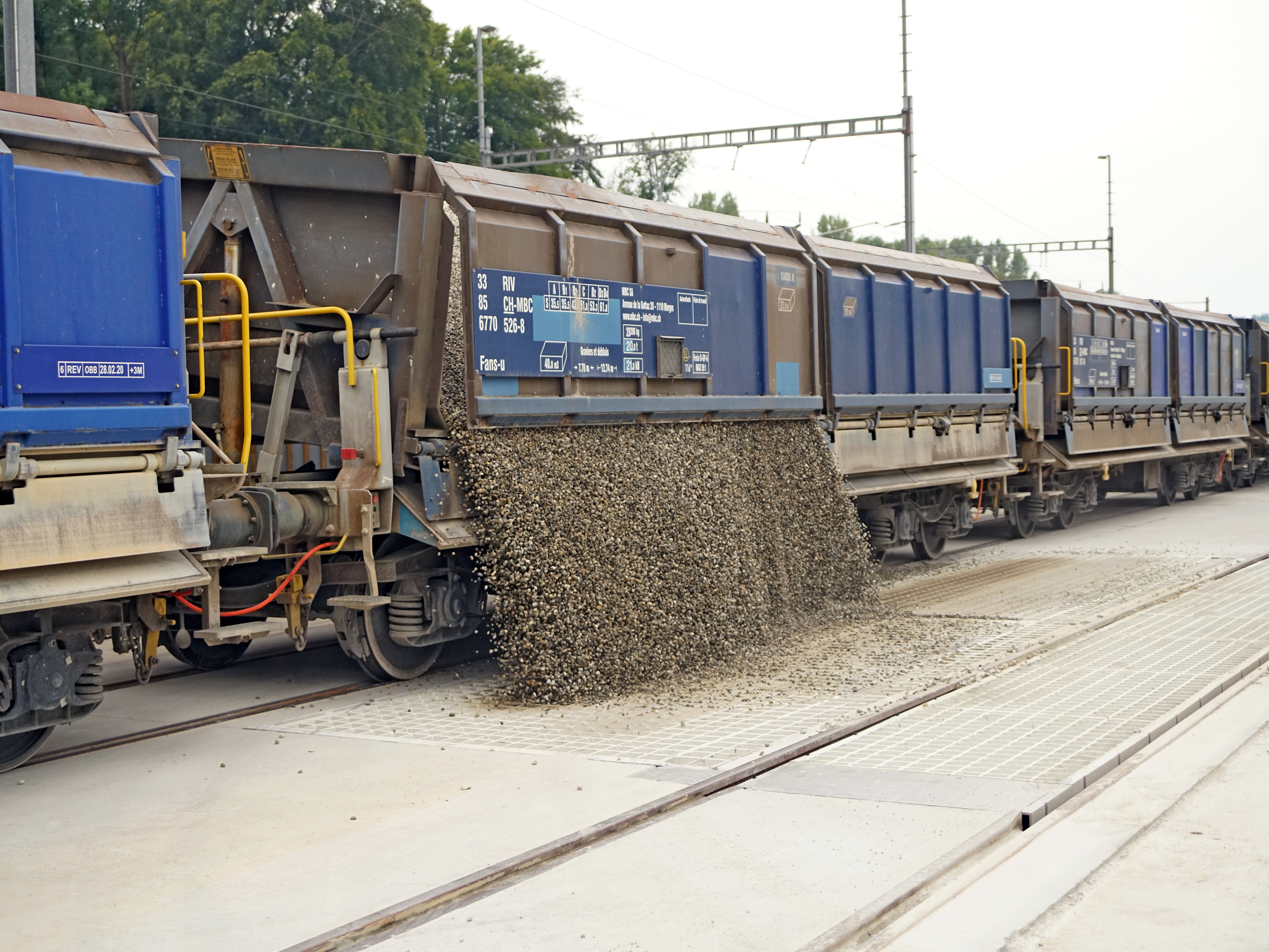 For guaranteed availability and, in particular, for high delivery flexibility with a total of around 100 standard types and as many special concretes or customer-specific recipes, both LINEMIX® 3500 ST in the BGO plant are designed as fully independent concrete mixing lines. The heart of each line is a BHS twin-shaft mixer with 3.50 m³ of hardened concrete/batch and a maximum output of 122.5 m³/h of hardened concrete per mixer. High-pressure cleaners in the mixers and concrete hoppers ensure fast recipe changes with the highest product quality. Separate scales dose binder, water and admixtures from the 18,400-litre admixture store (12 tanks). Both mixer lines are prepared for colour or fibre dosing and the installation of a hot-water heating system.

The tried-and-tested Dorner control systems are also independent, right up to the double command station directly next to the two concrete delivery units. In addition to a quick overview of all plant statuses, running and pending batches, the video monitoring of mixer, concrete delivery and other neuralgic plant areas ensure a high level of operational safety, even without a large number of personnel. 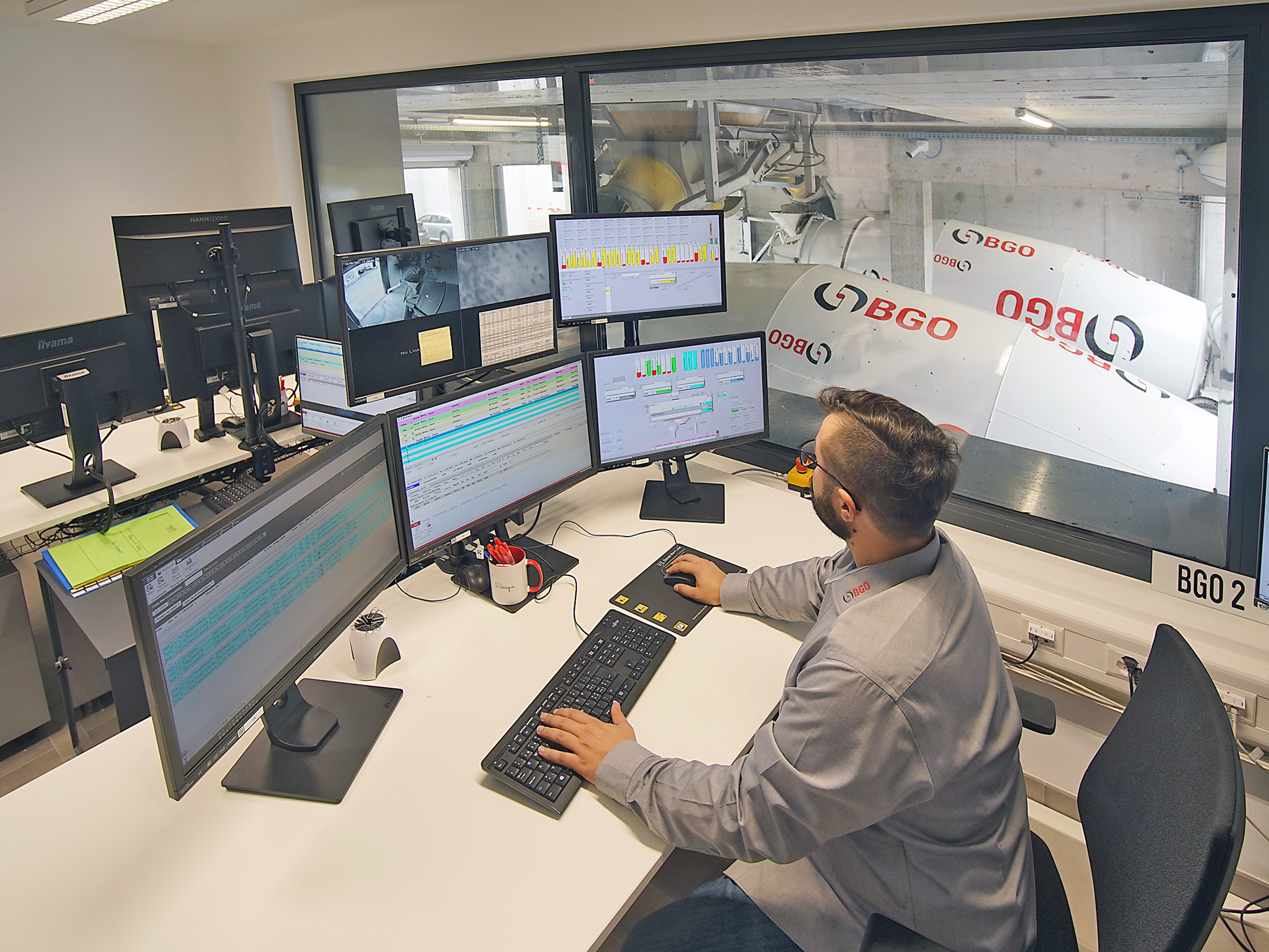 The scheduled installation of both plant lines by the SBM teams and external partners took only about ten months. Even before the official acceptance at the beginning of July 2021, the plant started customer operations – by the time of the ceremonial opening at the beginning of September, the responsibles were able to report the production of around 6000 m³ of concrete, which is also distributed by BGO's own mixer truck and pump fleet in the Lausanne/Morges area.

The responsibles at BGO draw a positive conclusion of the project with a total investment of about 51 million EUR (of which SBM plant technology: approx. 9.0 million EUR). From the first visits to current SBM references, to the presentation of initial solutions, to the concrete implementation, the cooperation with the Swiss representative Wagner+Betontechnik and the experts in the Upper Austrian SBM development centre Oberweis was very targeted, especially with regard to the flexible implementation of specific requirements in all project phases.