Drum beat in the 40 ton class

After the presentation of the compact 27-tonne JAWMAX 200 last autumn at the same site, SBM again invited to the MFL Group's approximately 22-hectare main plant. In addition to the foundry, mechanical engineering departments and production facilities of the sister companies Maschinenfabrik Liezen and the grinding specialist Christian Pfeiffer Maschinenfabrik, the large plant also comprises the assembly lines for the crushing and concrete mixing technology of SBM Mineral Processing. The headquarters and development center of the company are located in Oberweis near Gmunden. 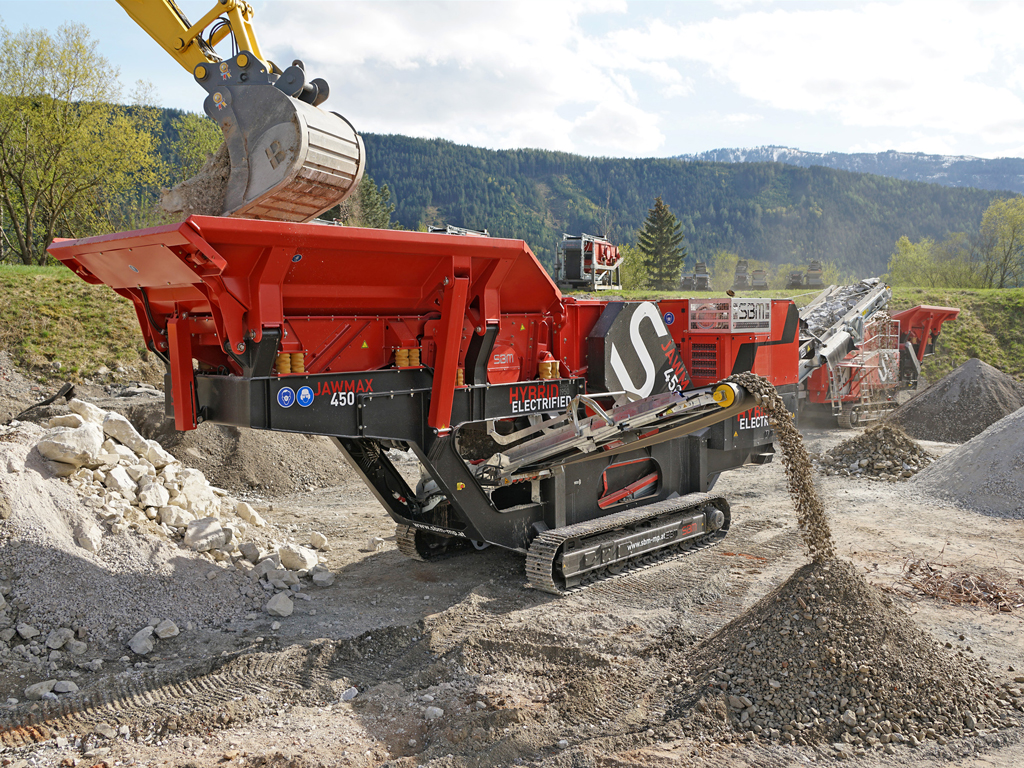 The extensive testing area at the Liezen plant offered plenty of space for an almost complete presentation of the SBM programme of track-mounted jaw and impact crushers, which has meanwhile been expanded to a total of ten standard models with operating weights between 30 and 60 tonnes. Also on display were various semi-stationary processing solutions and the company’s successful concrete mixing technology. However, the focus was on performance-oriented demonstrations of the fundamentally redesigned JAWMAX 400/450 series and the REMAX 450 impact crusher, based on the REMAX 400 model already introduced in 2018. The common feature of both new "450s" is a high-performance pre-screening unit that effectively separates contaminated or valuable material, thus reducing crusher wear while noticeably improving the crushing result in terms of quality and output. The new double-deck pre-screen is designed as a circular vibratory screen and is directly connected to the vibrating chute in the feed hopper. Via a triple flap on the screen run, the two fractions can be discharged in full or in part as fines or added to the end product as crusher bypass. Compared to the doubledeck grizzly feeders of the 400 models, the pre-screen increases the hourly capacity by about 50 t/h to a maximum of 450 tonnes per hour, which positions both the 49.2 tonne REMAX 450 with the large "1300" impact crusher and optional secondary screen, and the compact JAWMAX 450 at the top of their respective performance classes.

According to the experts present, the new JAWMAX 400/450 are in a league of their own anyway. Like all SBM mobile crushers, both models have a diesel-electric / fully electric drive with an optional mains connection. The drive unit consists of a 6.7 l Cummins diesel (170 kW at 1500 rpm) in the current EU-V generation and a 200 kVa on-board generator feeding all electrical drives (feeders, sieves, conveyor belts, etc. .) as well as the electrically operated hydraulics for the lifting cylinders and track drive.

Via a V-belt, a 110 kW electric motor drives the new STE 110-70 jaw crusher, specially developed by SBM for mobile application. As one of the largest crushers in the 40-tonne class, the 14.35-tonnes unit offers an inlet opening of 1100 mm x 700 mm. The nominal feed material size of 0-700 mm, a max. lump size of 1000 x 600 x 600 mm and the design for rock strengths of up to 400 MPa enable a very wide range of applications, from the processing of large-sized concrete residues to the crushing of hard natural stone varieties or slag. A large stroke of 34 mm, the fully automatically monitored gap adjustment of 40 – 160 mm, to be also adjusted under load, and an optional overload protection on the crusher ensure a continuously high production output of high-quality final aggregates.

According to SBM, particularly the JAWMAX 450 with the independent pre-screen sets real standards in terms of economy and practical applicability: Offering probably the most sophisticated hybrid concept on the market, the diesel-electric / fully electric 40-tonne system guarantees a diesel consumption of 15-20 ltrs./h in normal operation – even with peak loads, still well below 30 ltrs./h. The optional connection to mains further lowers the direct energy costs – depending on the tariff by up to 60% compared to diesel-hydraulic mobile plants of the same performance and by a good 30% compared to the use of the machine’s own onboard diesel. And all this, ensuring full functionality, without local exhaust gas emissions or leakage risks, which is already an important award criterion in many places in inner-urban recycling or when working in protected areas.

Thanks to its "clean sheet design", the JAWMAX 450 also scores with optimised transportability. With a transport weight of only 39.2 tonnes and slim 14.71 m x 2.88 m x 3.60 m (l x w x h), the 450 tph crusher not only outperforms many competitors in a direct class comparison, but also becomes a real alternative for the performance-conscious operator compared to much less productive "city crushers". After unloading from the low bed or uncoupling the optional three-axle dolly, the hopper walls, overband magnet and the high and wide reaching discharge conveyors can be positioned hydraulically without tools, making the plant fully operational in just over 5 minutes. The operator is supported by the standard multi-functional remote control and setup routines of the intelligent SBM Crush Control system, which also monitors and controls the fully automatic crushing operation along pre-set parameters. A web-based app also allows remote access to all important operating and production data.

Both new models are another important step in SBM's market strategy, which is geared towards medium-term but sustainable growth, as Managing Director DI Erwin Schneller and Sales Director  Helmut Haider emphasized on the sidelines of the product launch. 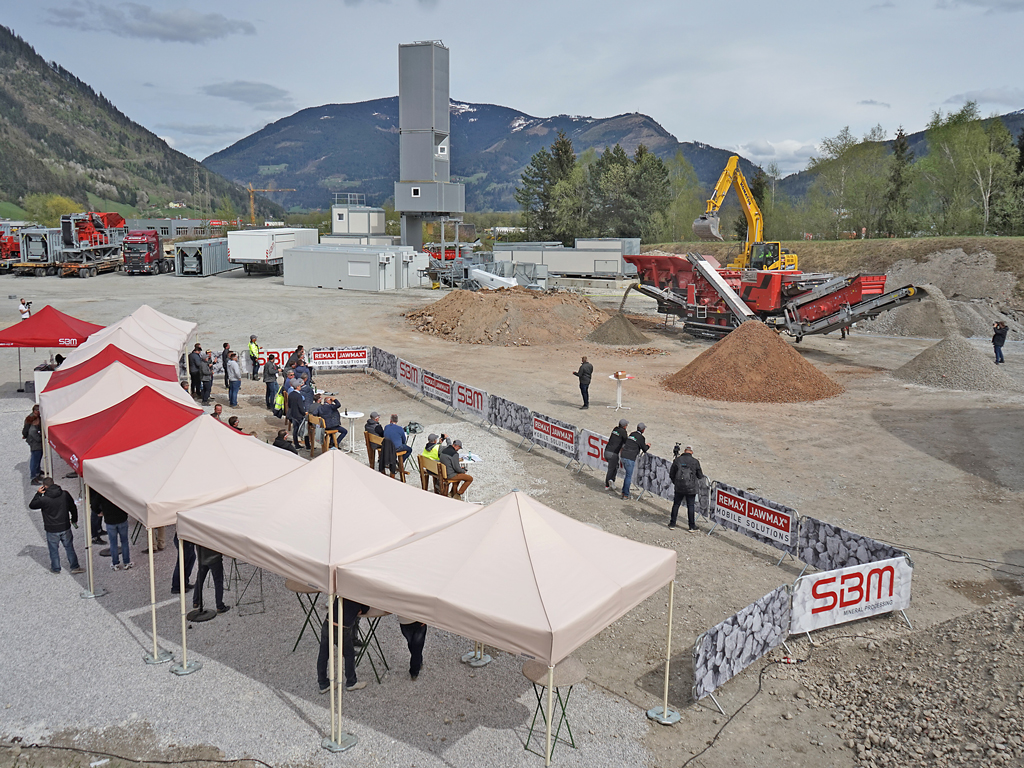 Last year, SBM Mineral Processing already contributed EUR 88 million to the MFL Group turnover of around EUR 210 million with a group sales increase of around 20% compared to 2019. In 2021 SBM’s share of sales is expected to increase again to almost EUR 100 million. The company, which has been part of the MFL Group since 2012, generates half of this in the fields of crushing  and concrete mixing technology. In the latter SBM is now firmly established in the international market, in particular with high-performance container and super mobile and stationary system solutions (up to 400 tph concrete).

Crushing technology is now set to undergo a similar development. The range of trackmounted solutions will be continuously expanded not only in terms of plant size, but also in terms of the applied crusher technology. In 2020 SBM produced 70 tracked mobile and semi-stationary (approx. 10%) crushing plants with 165 employees, around 100 units will leave the Liezen factory this year, as sales manager Helmut Haider announced. A quick look at the range of models reveals which gaps could be filled in the coming years: For impact crushers and jaw crushers, these are the performance classes above 50 to 60 tonnes of operating weight. However, in view of the decades of experience within the MFL Group in the construction of stationary processing systems and the great innovation potential of SBM's own R&D departments, an expansion of the track-mounted range to include other technologies of qualified secondary crushing is also to be expected. In Liezen, Sales director Haider put out sales of over 200 mobile units per year as a concrete growth target as early as 2024.

To achieve this, SBM is also working intensively on expanding its international dealer network. On the occasion of the product launch alone, the company welcomed another five new exclusive or regional partners for important European markets and neighbouring regions not previously covered. Here, too, SBM is guided by its philosophy as a mediumsized company: “We do not want any market share at any price in any remote areas,” says Helmut Haider, himself a member of one of the three owner families of the MFL Group. "The same sustainable standards that we put on our technologies and products are also applied to our sales and service partners." This includes, for example, crosssector customer proximity and advisory skills, fast response times in the regional repair and maintenance service as well as the supply of parts and the targeted set-up of customer-friendly SBM rental parks as an indispensable entry ticket to regional markets today. 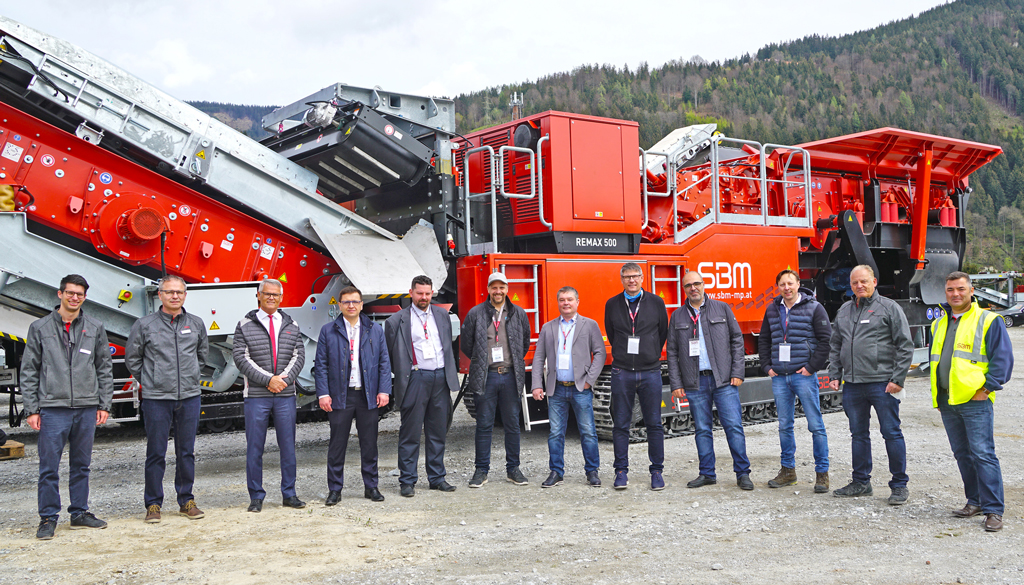 "We are initially concentrating on Europe with the large Central and Northern European core markets and the neighbouring growth regions in the Mediterranean area and Eastern Europe. In a next step, we want to really gain a foothold in the highly competitive British market and then turn our full focus to North America, where we have already been able to place an initial population of around 20 mobile units in Canada, including our own aftersales structure," Helmut Haider outlines the controlled international expansion, which since last year has also been driven forward by industry veteran Michael Brookshaw as Global Distributor Manager.